My hero died yesterday. I think when most people think of their hero or role model they think of a sports star or perhaps a courageous military figure. My hero was (still is) a dog. A brilliant white German Shepherd named Schatzie. 1991 was a great year for me. Back at Ft Bragg from Iraq I rekindled a flame with a high school love. She is Tricia Davis and with her discovered the world of search and rescue dogs (SAR DOGS). Trish and I married and moved to Ft. Benning Georgia in 1992. A year later my brother Tim presented me baby Schatzie as a Christmas gift. My still growing fascination for search and rescue received a serendipitous discovery. A SAR Dog team leader, Sandy Crain, was living where we would soon call home near Ft. Benning. Sandy was the leader of Georgia K-9 a renowned SAR Dog unit with working ties to the FBI, Georgia Bureau of Investigation (GBI) and others in need of search dogs. We asked Sandy for a chance to join the team, passed the requisite screening and started our life as a SAR dog team. We worked countless hours learning the intense profession. Days turned into years and Schatzie became a proficient SAR Dog. To enhance my value to the SAR team I enrolled in the Georgia EMT-I program. While in this program I learned about Emergency Management and preparedness.
Why my hero? I am writing this from Atlanta, here attending the 2010 US Public Health Preparedness Summit as the Director of a regional emergency preparedness office based in Columbia SC, a significant and vital public office. I would not be writing this tribute if not for the chance destiny resulting from my human-canine interface with Schatzie. The result of this human/canine relationship is who I am today.
A hero can be that being that leads you down a righteous path you did not expect. Schatzie and I walked many miles of paths over all types of terrain. This path presented me the opportunity to realize my professional goal. When our daughter Delaney was born in 2002 search and rescue became a minor interest in my life. Yes Schatzie was still a geared up dog with many years left but we choose to retire from search and rescue. She lived out her many remaining years surrounded by the family she loved and by me the person who found his way through her. I miss her of course but I know a tireless four legged white angel is always waiting and ready. 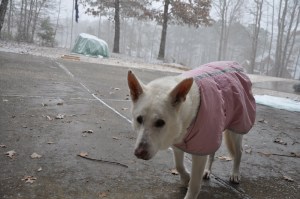 >Last of the line.
I mowed the back yard today, but this usually mundane chore was very different, it was the first time in almost 18 years I did not have a German Shepherd or two following behind me.
Chief our wonderful German Shepherd crossed over to the other side Saturday May 29th. A sudden and rapidly growing cancer was discovered in his abdomen. Chief was the last of our SAR dogs, preceded in death by Schatzie and Ajax. A gentle giant Chief who could enter a classroom, church, or just walk up to you and display an affection that surprised most people because of his size (and breed of course). He could speak on command or whenever he felt like talking, the only problem, he knew only one volume, wide open, probably a result of the SAR recall or refind where the search dog barks to let his handler know he has found someone. Chief had to retire early from SAR work because of a heat stroke in 1999. He always loved his people and his collection of stuffed animals. Strange he never ripped or chewed these toys, only carried them around the house and yard. Chief will be missed by many but joined by his old pack in the afterlife. Chief was 13.
watching over us

taking a nap on Delaney’s bed

Ajax-not forgotten, a searcher too such a good boy

For nearly 15,000 years 1dogs have lived with and served humankind as companions, hunters, shepherds and most recently detectives. 2The average canine possesses hundreds of millions of receptors for odors, compared with a few million for humans. 3Their outstanding sensory endowment, olfaction, makes dogs sought after by law enforcement. And in the last century, the cultivation and harnessing of this ultrasensitive faculty has become a part of many facets of criminal investigation.