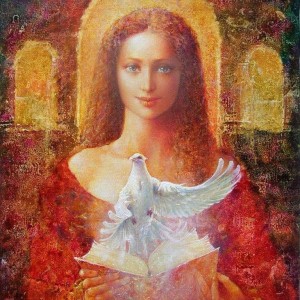 It is hard to explain to the non-Orthodox the position and role of a priest’s wife. As a convert priest, my family life extends to both Protestant and Orthodox experience.  I have been married for 40 years and ordained for 35 of those years. I cannot imagine my life or my ministry without my wife.

Despite the experience of married priests, the canons of the Church in the West began to insist on priestly celibacy. The matter of married priests in the East was settled firmly by the seventh century. Priestly celibacy was a continual debate in the West and only came to be insisted upon around the 11th century. Priests in England, for example, were married until the Norman invasion in 1066 when the canonical rule of celibacy began to be enforced.

One of the first things that occurred in the Reformation was the abolition of priestly celibacy. Martin Luther had been a Catholic priest and a monk. He married a former nun and had a family and children. His example was quite common. Thomas Cranmer secretly smuggled his wife into England even before the Reformation. I have great sympathies with the Reformers in this matter. However, when you read about this return of married clergy you get the distinct impression that it was about the question of sex (it’s ok, even for clergy). But you do not get any clear sense that the Church now knew what to make of his wife. And here, Orthodox experience is different.

Married priests are normative in Orthodox parishes. The canons governing marriage and priesthood simply state that a man must be married before he is ordained and that the woman he marries cannot have been married before. And this marriage is the only marriage for the priest. If his priest’s wife dies, he does not remarry. It is an extremely literal interpretation of “the husband of one wife” (Titus 1:6). There are celibate priests and monks, of course, who serve in parishes, but they are relatively rare.

Orthodoxy thus has an experience of priest wives that is 2,000 years old. It is not a novelty or an
mrOlgainnovation nor is it seen as an accommodation to human needs. I found after my conversion, that the wife of a priest was herself surrounded by custom and tradition and held a place unlike any I had seen before. Those traditions and customs are simply the expression of the Church’s inner life. For example, the wife of a priest has a title. In Greek, she is called, “Presvytera” (the feminine form of “presbyter” or “elder”). In Russian she is called, “Matushka,” which is a diminutive of the word for mother. She is thus, “Our beloved mother.” Other Orthodox languages have similar titles that have evolved.

The fact that there is a title points to a role and an honor that surrounds the role. A priest’s wife is not ordained and does not carry out liturgical functions, but she is considered deeply important in a parish’s life. Different women have different gifts and they get expressed in various ways. But just as in a household with two parents, the Presvytera is not just a “companion.” To a degree, as the priest is a spiritual father in a congregation, so his wife is a spiritual mother. And like mothers and fathers elsewhere, those roles get expressed in different ways. But rarely is the Presvytera absent in the life of the parish. She is important and normative.

Over the years of my ministry, I have made very few decisions (especially important ones) that were not a product of much thought and conversation with my wife. After all, the consequences of my ministry are consequences in her life as well. Her wisdom is essential. She not only knows the parish, but knows me, and can point out my errors far more effectively and accurately than anyone else.

I have often thought that the lack of veneration for the Mother of God in Protestantism contributes to their confusion regarding the role of women and of women who are married to ministers. In my Anglican years there was an increasing tendency to professionalize the priesthood, in which my wife was just a “corporate spouse,” someone for whom the Church was “none of her business.” I did not like it. But the veneration of the Mother of God opens the heart to something that gets neglected otherwise. I see it in my parish though I have a hard time putting it into words.

There is a priest wife in Alaska, Matushka Olga, who is venerated as a saint. Her case has not been brought before the Holy Synod, as of yet, but will undoubtedly move forward. She was a midwife within the nearby villages, well-known for her radical generosity and even for miracles associated with her prayers. The miracles continue. I eagerly await her canonization.

This week I received the news of the falling asleep of Matushka Sissy Yerger, whose husband is the priest of the OCA parish in Clinton, Mississippi. My wife and I met her several years before we became Orthodox. Together with her husband, she was a living example of a gentle, Southern Orthodoxy that we had not imagined to exist. The soft drawl of her dialect and the warmth of her hospitality made Orthodoxy native to this part of the world. She was beloved by all who knew her and will be deeply missed. I too often think in terms of doctrine and speak of “my journey” into Orthodoxy. But the truth of it is that, like all things in my life, my conversion was “our conversion.” The witness of women like Matushka Sissy was essential in knowing that we were headed towards greater sanity.

All across the world of Orthodoxy there are such women who bring a wholeness to the life of a parish. We often speak of the “parish family.” The role of mother is certainly as essential as the role of father. I have realized, with reflection, that I have never thought of my brother priest, Fr. Paul Yerger, without his wife. I will not begin to do so now. I mourn for my brothers and sisters in Clinton. They have lost a dear friend and a true mother. May the Lord comfort them!

May her memory be et